The Teeser has been providing professional, quality embroidery services in Sinagpore for over 10 years.  Contact us to embroider your uniforms, caps, logos and emblems.

Embroidery is preferred by companies who would prefer to have their logo embroidered on the front of their Polo T-Shirts, it is easy to care for and last for a long time which would be great for company annual functions and events. Embroidered company logos almost always look better as an embroidery. We deliver quality every time.

-Choose the right design: This is the most important part of any project. Make sure to choose a design that is well suited to the project and that will look good when it’s finished.

It’s important to find an embroidery service that takes pride in their work and is passionate about delivering the best possible product. The team at The Teeser understands this and strives to provide a quality experience that meets the highest of standards.

From start to finish, our team will be with you every step of the way, ensuring your project is completed on time and to Embroidery has been around since 30,000BC, when Cro-Magnon man began to use basic tools to hand stitched clothes, shoes and hats.

The combination of Embroidery, fiber and needlework has its origin in both the Asia and Middle East. It was in these locations that people first began to begin to decorate clothing and objects.

The first Embroidery machinery appeared during the Industrial Revolution in France during the year 1832, by inventor Josue Heilmann.

Later in the early 1900s the manufacturing of machine-made embroideries became commonplace in the town of St. Gallen in Switzerland.

How Does Embroidery Work?

Experienced embroiderers will look at the such areas as the level of detail of the artwork, the size and styling of lettering and color that is used in the artwork.

Once the image is approved for embroidery, an embroidery card must be created where the “card” represents a computer-generated process that will be used to create the actual embroidery.

In many cases the embroiderer will create a test embroidery and make additional adjustments to the setup before beginning actual production.

The embroidery is created using a specialized sewing machine that uses a embroidery hoop (plastic ring) that helps to guide and stabilize the needle and thread.  After embroidery is then trimmed of any excess backing from the design. The Embroidery process involves a multi step process from artwork inspection to cutting and trimming of the embroidery. 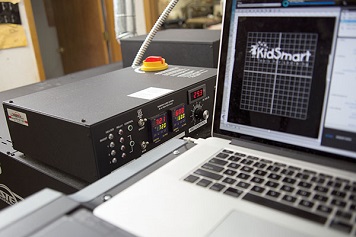 Our first step is to make sure that the artwork used for the embroidery will yield a satisfactory result. We recommend not using artwork that has  small or thin lettering, and color gradients. Digitizing Artwork is where the magic happens, as we transform your 2-dimensional artwork into an embroidery.  The embroidery machines create highly detailed stiches of your artwork. We use the digitized embroidery image to create a test sample of the embroidery. Our Sewing experts use this step to adjust and fine tune the embroidery before we begin producing the actual embroideries. The embroidery is now ready to be sewn onto the garment or hat. We use a paper like backing that helps keep the form of the new emblem. We make sure to trim any excess backing from the embroideries.

Embroideries make uniforms and cap look professional, they are also durable and colorful.

Embroidery has been used for thousands of years, on leather, canvas, polyester, nylon, cotton, and other synthetic materials.

Embroidery works on bags,  dress shirts, robes, suit coats, towels, & many other items.  Contact us for more information about Embroidery.

Embroideries have been used on military uniforms for many centuries and are still found on today’s modern uniforms.

There’s something about an embroidery that makes a uniform or ball cap look professional.  Contact us today about your company uniform.

Embroidery designs are long lasting because they do not wash off or fade. They are usually made from strong nylon or polyester and come in a variety of brilliant, vivid colors.

Embroideries are a great selection for company uniforms and baseball caps.

Embroidery does involve some setup time, so the costs are better for larger orders.

Embroideries do involve some set up time, they also use resources to stitch the embroidery which can become costly for jacket sized embroideries. We recommend that you contact us to discuss the best solution for your company uniform.

Contact us to learn more about using our embroidery stitching process for your project.